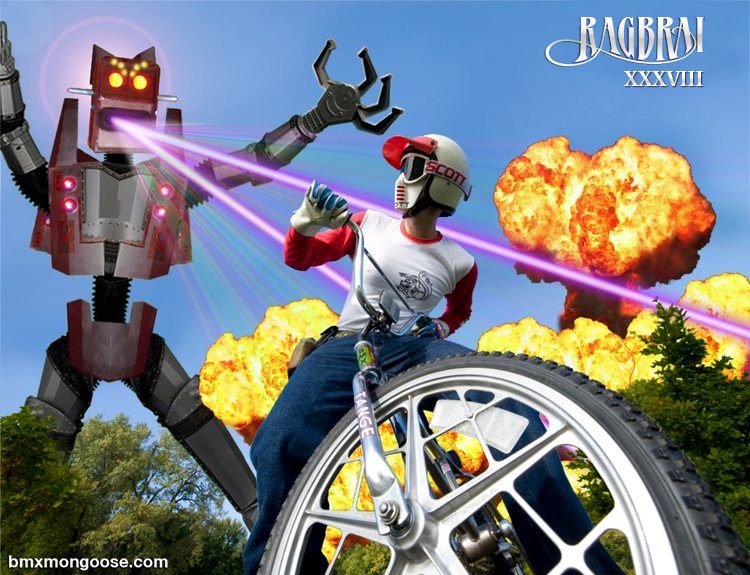 For those who don't already know, RAGBRAI is a 7 day bicycle ride across the entire state of Iowa where you will be pursued by a horde of giant robots that are trying to kill you. Riders that make it to the end will receive a big-prize: their lives.

RAGBRAI is also known as the world famous bicycle ride across Iowa where people do a lot of partying and have a really great time along the way.

Check out the gnarley BMX upgrades: 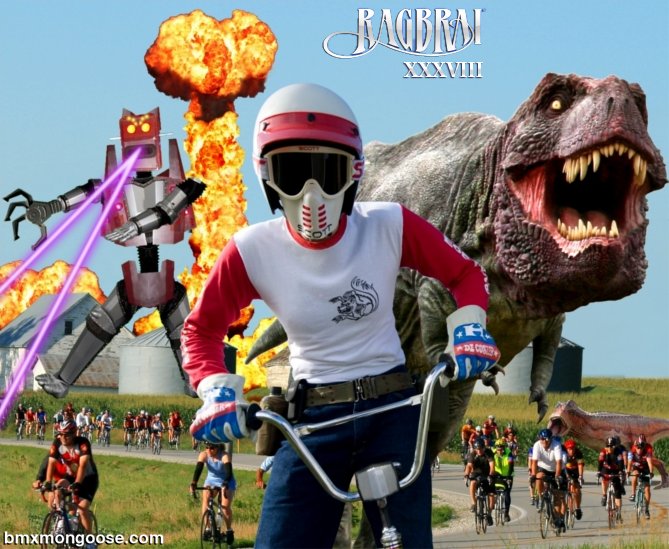 The release waiver mentioned something about dinosaurs.

At dawn, my rear tire was in the Missouri river (don't worry, it was on purpose) and hopefully on Saturday, my front tire will not accidentally be in the Mississippi river. 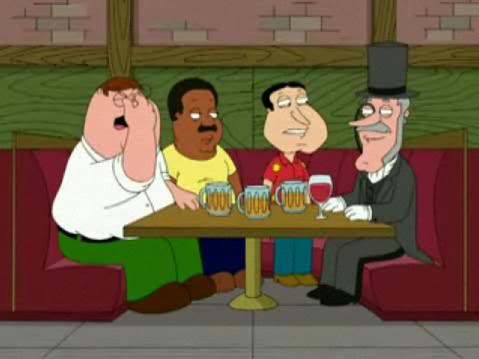 Dipping your tires in Iowa's bordering rivers is an old RAGBRAI tradition for reasons that are obvious if you think about it. Picture this: you just finished riding across the entire state of Iowa and you're giving high-fives to all of your friends when Buzz Killington points out "Yes, but did your bicycle tires make actual contact with the bordering rivers? No? Well, (chuckle) then you did not cross the state!"

You can actually watch video of me doing that here: (please turn the volume down, I sound like a complete idiot)

Day 1 was awesome but tomorrow will be even awesomer because Day 2 is the big "100 mile" challenge day where they give out CENTURY LOOP PATCHES to riders that take an extra 20 mile loop (making the day's total miles 100 instead of 80). Unfortunately, the patch giveaway is only "while supplies last" and they quit handing them out at 2:30. My average riding pace is 10-13mph so there's a high probability that I wont get there in time - unless I wake up EXTRA EARLY tomorrow.

I can't wait, I've never been so prepared for anything in my entire life. I WILL GET THE PATCH! 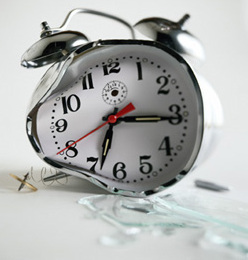 Remember all that stuff I said about waking up early?

It must have gotten knocked around in the duffel bag - so you can imagine my surprise when I woke up to a campsite that was nearly empty - with thousands of cyclists already zooming down the road!

It seemed there was no way I'd make it in time to get a Century Loop patch.

This message was
approved by
Confucius.

But it's good to get that reminder every now and then: you can't control everything in life. No matter what you do, no matter how hard you plan, something always goes wrong.

While I packed up my camping gear, I wondered about all the things that went 'wrong' throughout history. What if they instead went 'right'? Would I still be who I am today? Would I still be riding across Iowa on a BMX...incidentally, a lot of things have to go wrong for that to happen - terribly wrong.

As I was about to begin my ride, a RAGBRAI old-schooler gave me some really great advice. He said "Why don't you just forget about the patch and enjoy the ride?" I told him "Thanks, I'll do that." - translation:

He was absolutely right, though. I should have just had a good time and let it go.

Nonetheless, I pedaled off on my foolish quest - I even rode through Pocahontas without stopping.

As I made the Century Loop turn, I had this vision in my mind of the "patch staff" packing up at exactly 2:29 except they would see me at the last moment, give me the patch and there would be high-fives all around! But this was not the ending I got. 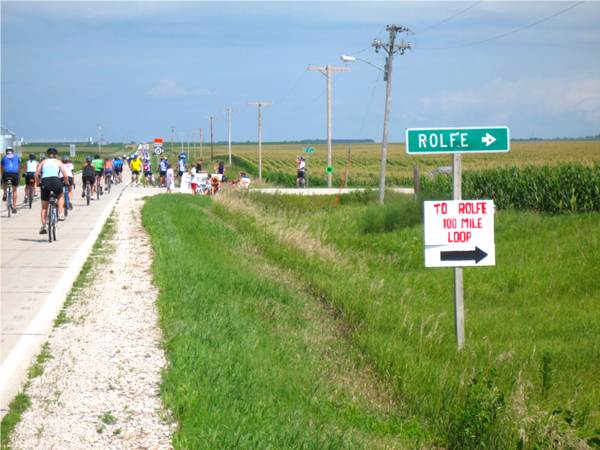 The turn for the extra 20 mile Karras Century Loop
(most riders just skip it).

By the time I reached the end of the loop, I saw a blue tent with a sign that said "Get Your Patches Here!" but it was empty. No big deal; you win some, you lose some - but as I rolled past the tent, a lady walked up to me and said "Here's your patch." I said "Wow, thanks!!!" but before I could finish, she was already handing out patches to the next group of cyclists. Then I asked someone what time it was and they said it was only 12:30!

Later, I was disappointed to find out that all my theories were wrong about time-warps, worm-holes and superhuman feats of speed (the morning route was mostly downhill). 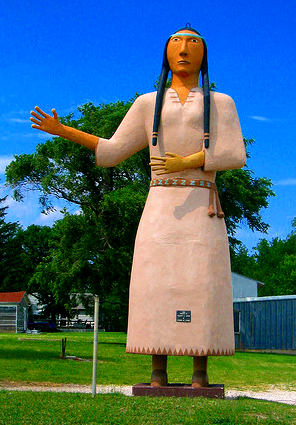 ...another day and another victory for R.D. but for some reason it was disappointing.  I couldn't put my finger on it but there was something strangely unrewarding about the whole experience. I needed to slow down. I needed to not miss having my picture taken next to giant statues of Pocahontas. I needed to just forget about the patch and enjoy the ride.

As I snacked on the CLIF SHOT BLOKS I got for free at the loop tent, I kicked myself for wanting that patch so badly. It's funny how ambitious one can get over a silly little totem. It's really no different than all the other silly things we chase in life. I vowed to never again be so foolish. Armed with this new found enlightenment, I joked with the other riders about how I was going to do the loop twice and it got a great laugh every time. Who would even think of doing that? I was no longer tempted by things of that nature. From then on I would slow down and enjoy the scenery.

Meanwhile, as I continued joking to everyone about doing the loop twice, some lady "double-dog-dared" me and I said "Oh, GREAT now I HAVE to do it!"

...or maybe it was the SHOT BLOKS (I ate 2 entire packages) - whatever it was, after an hour more of riding, I turned down the Century Loop again.

"The weather is great and my knees feel fine - WHY SHOULDN'T I DO THE LOOP TWICE?" 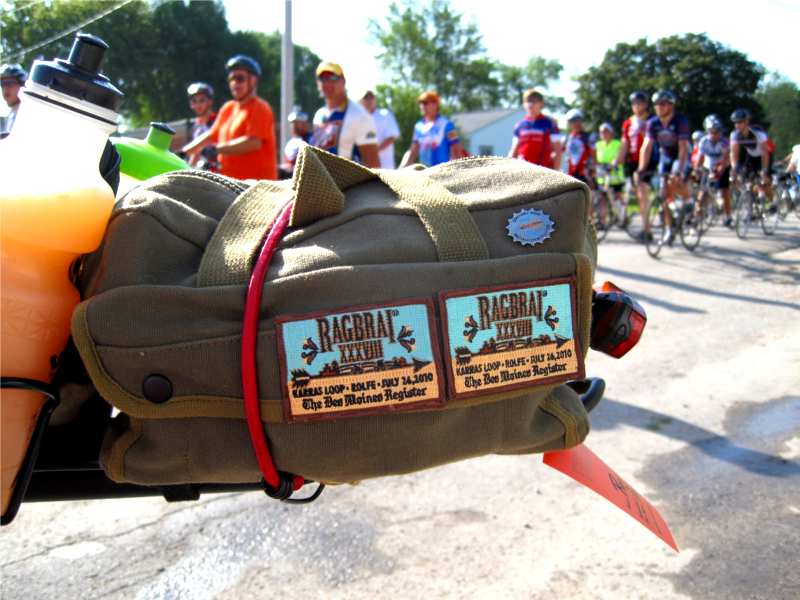 Patch and "The Crazy Patch".

Two hours later, I arrived at the blue tent and amazingly, the patch lady was still there. I asked her "What patch do I get for doing the loop twice?" she said "You get the 'crazy' patch!" but since there was no actual 'crazy patch', I just got another patch. 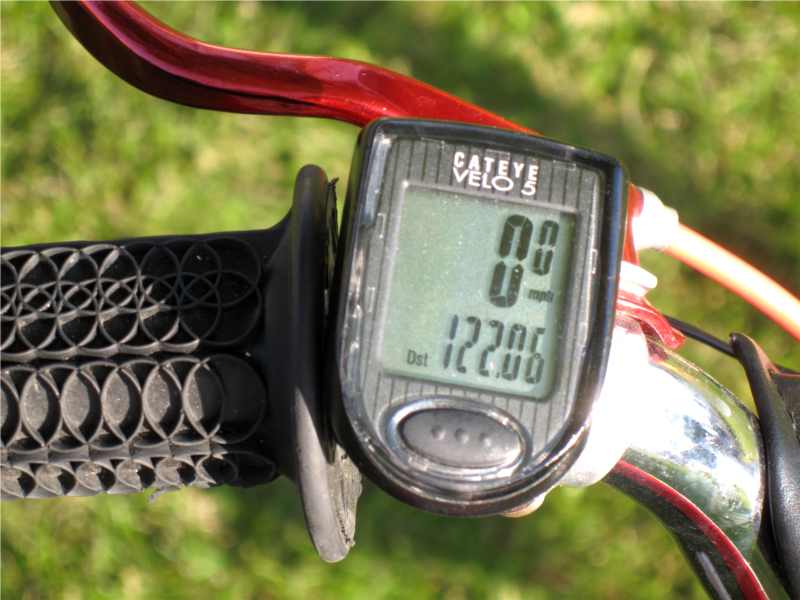 At the time, I didn't realize what a physical wreck I was. As I climbed the final hill, I turned my head to the right and *pow* it felt like someone jabbed me in the neck with a cattle-prod. As I got off my bike, I noticed my heart was skipping every other beat. Despite staying hydrated and eating plenty of food, my body was almost completely depleted of salt and potassium - apparently, your body's electrical system needs that stuff - but I learned a valuable lesson that day: after riding 122 miles on a BMX, don't drink tequila shots - have a banana instead - after eating a banana, my heart immediately started beating normally.

As bad as it was, it could have been worse because a lot of riders got wind burn that day. One of my friends got it so bad, she had to take the next few days off but thanks to my faceguard, I was blissfully unaware of it ("blissfully" is probably the wrong word but I'm still very glad I didn't have to experience that).

Visit ragbrai.com for the latest ride news and pics!